Over the past decade technological innovations in automobile lighting have not only improved product quality and fuel efficiency, but have also enhanced the best value for customers’ value for money and manufacturers have responded with path-breaking product features at best prices.

Motorcycle lighting market contains many inherent and well-recognized risks and minimizing or eliminating these risks draws attention from hundreds of manufacturers and sustains a large international market.

Numerous technological advancements were observed in the automotive lighting segment over the past 5 years. It witnessed the advent of incandescent lamps, halogen lamps and xenon lamps. Currently LED lighting is gaining attraction worldwide.

The current penetration of LED lights in automobiles is lower than conventional halogen and xenon lamps globally. However their use per vehicle will increase as the demand for vehicle design differentiation and introduction of new applications increase. LED lights provide designers excellent flexibility in creating new lightning styles helping manufacturers command a significant price premium.

The LED revolution for automobiles have taken safety, efficiency and design versatility to a new level offering manufacturers to gain market credibility. These features combined with substantial environmental benefits, make LED lights an option to the industry. 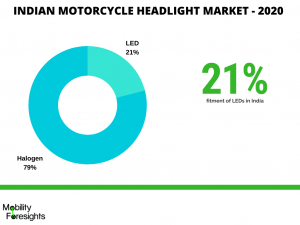 In addition, the lighting system companies are working with their partners to jointly research computer-supported simulations intended to predict the service life for the new material. The research centers, in turn, contribute their expertise in modeling, simulation, operational lifetime forecasting and damage analysis and the key area is analyzing defective components using accompanying products like X-ray tomography.

OEMs further explore to improve safety and expand headlamp design of motorcycles by taking extensive experience with automotive technology. Looking ahead to autonomous driving society in the future, companies are proposing next-generation lamps with built-in LiDAR sensors and cameras, which more than function as lighting devices.

The lighting and electronics expert HELLA has started a new research project together with further partners. The main focus to establish communication between autonomous vehicles and other road users can be ensured with the aid of automotive lighting technology. Among other things, the researchers are investigating how an autonomous vehicle can use light-based systems to signal that it has detected a pedestrian or cyclist and that it is safe for them to change sides of the road. For example, the use of LED-based status indicators or displays on the vehicle body is conceivable.

The Global Motorcycle Headlight market is estimated at $XX Billion in 2020, growing at XX% CAGR till 2026.

Varroc Lighting Systems (VLS) has developed ADB headlamps, which communicate with onboard cameras and sensors to allow the user to drive with high beams permanently without glaring oncoming fellow drivers. VLS also held a workshop to demonstrate technology from 10 to 1.3 million pixels to key North America OEMs and the media.

The majority of the large number of patents ZKW applied in 2020 are for technologies and sensors used in autonomous driving. One of these inventions, for example, ensures an optimal view of camera sensors at night, by providing targeted illumination of the area around the vehicle with an intelligent headlamp.

Laser-powered headlights are already available on BMW Motorrad’s flagship model, the BMW K1600GTL. According to BMW, the benefits of a laser-powered headlight are a reduction in power (half of a comparable LED system), a brighter and true white light, and a longer high-beam throw distance (600 meters, double that of conventional headlights).