Television (TV) comes from the Greek τῆλε (tele), meaning “distant” or “far,” and the Latin visio, meaning “sight” or “vision.” It is a mode of (tele)communication typically used for transmitting moving (color) images (and potentially sound) to audiences. Although the technology was commercially available in the late 1920s (in very limited amounts and at a very high price), television has since become a common household good.

From around the 1950s onward, television increasingly became the primary medium in the Western world for shaping public opinion because of the saturation of television in society. Color televisions became widely available from the 1960s, and because of the availability of media such as video cassettes, laserdiscs, DVDs, and high-definition discs, viewers have been able to use the television to watch pre-recorded material. 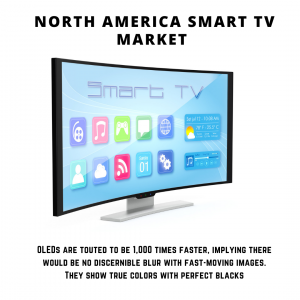 But there is actually more technology to television than just lights, lenses, camera tubes (today a type of integrated circuit called a charge-coupled device), amplifiers, encoders, scanners, transmitters, and receivers. Perhaps the technology most important to tv is the aspect of the human brain that allows us to assemble a series of still images shown in rapid succession into a single, moving picture. This key aspect of tv caused some early observers to think of television as a “conquest of nature” that caused “time as well as space” to be eliminated.

Television technology has been evolving since the day of its invention with new and more sophisticated arrangements being brought into complete existence. This has given the required edge for the users to adapt and bring the best out of the required compatibility.

Another technology that the North America Smart TV market has changed its approach dynamics is HDR (High Dynamic Range). HDR is basically technology to improve two important factors: contrast ratio and color accuracy of the content on the TV.

With HDR, bright parts of the image get much brighter. So, it seems the image possesses more depth. Color range expands as well to show brighter blues, greens, reds, and everything in between. Thus, HDR-compatible movies push TVs to their limit, with brighter highlights, perfect blacks, and wider color gamut.

HDR10 uses static metadata. Metadata is additional data supplied to the TV which tells it how to show the HDR content. Static metadata means that this data is embedded at one shot. This is different from dynamic data wherein instructions are given scene or sometimes even frame by frame.

In terms of its operability, the changes have been brought upon towards the OS compatibility on various occasions. One of them most used OS in the Smart TV market of North America has been the LG’s webOS which is one of the best TV OS.

Introduced in 2014, the UI of webOS hasn’t changed much but there have been some gradual improvements over the years matching the need of the time. The main advantage of webOS is that it’s exceptionally user-friendly, stable, fast, and least prone to slowdowns. Also, the apps on webOS take up significantly less space vis-a-vis Android apps. Talking about the negatives, webOS lacks broader ecosystem apps that Android can offer.

The North America Smart TV Market can be segmented into following categories for further analysis.

There has been recent technological advancement made within the operational capability of the Televisions through the North America Smart TV Market in order to increase its viability and operational efficiency through varied multidisciplinary integration. Two technologies are revolutionizing the display panel of TVs. They are OLEDs and QLEDs.

LG is the forerunner of OLED technology. It supplies OLED panels to other TV manufacturers like Sony, Panasonic, Philips, etc. OLED stands for Organic Light Emitting Diode. Basically, OLED TVs use organic material in the panel that glows when electricity passes through them. On the other hand, the conventional display panel of LED TV comprises LCD screen that is backlit by small LED lights sitting behind the LCD panel.

OLED has taken a big leap over conventional LEDs in terms of response time. OLEDs are touted to be 1,000 times faster, implying there would be no discernible blur with fast-moving images. They show true colors with perfect blacks. But they cannot get extremely bright. They max out at 1000 units whereas competing QLEDs can go beyond 2000 units.

QLEDs are Quantum-dot LEDs that are nothing but microscopic molecules (nano-sized semiconductor crystals). when struck by incident light emit their own differently coloured light. They possess good light absorption and emission capacity making them suitable for vibrant picture generation.

The biggest advantage of QLEDs besides very good picture quality is that they can get far brighter than OLED. Some of the premium QLEDs in the market have 2000 nit brightness. This means no matter how bright your room is, you can still enjoy content on the QLED TV without worrying about on screen reflection.

Electric Vehicle based telematics has seen an increased level of integration in recent days considering their importance towards safety and health of EVs at all times. This has brought upon the much-required approach of technology propagation and better advancements to be made into the EV manufacturing systems and operational system of EVs.

Samsung Electronics has been part of the technological advancements and integrations in the global market of operations alongside their involvement within the North American Market.

The technology giant has recently launched the Neo QLED 8K resolution based Smart TV in the Market with a backlight dimming technology that precisely controls the proprietary Quantum Mini LEDs of Samsung. The unimaginable details expressed in both the darkest black to the purest white with x1.5 more lighting zones than normal Quantum Matrix Technology.

Samsung’s powerfully intelligent 8K processor creates an unbeatable viewing experience that’s optimized to any viewing condition. AI upscaling technology makes sure you feel the full power of 8K in everything you watch, regardless of the original source content.

TCL has been part of the technological initiatives of the company to have better upgradation and operational assistance for enhanced requirements. It has recently launched the P725 Model which is the latest addition to the P Series arsenal – including 4K HDR Picture Quality, MEMC, Dolby Vision / Atmos, Hands-Free Voice Control 2.0, and much more. Experience scintillating sports and enthralling entertainment via a TV built for greater enjoyment.

A new quad-core 1.3 GHz processor is built to enhance the entertainment, optimizing overall hardware and software performance. A chipset-enabled TCL algorithm processes content in real time, detecting the environment and upscaling display and audio. Picture is optimized according to content; so oceans appear bluer, and rainforests lusher. Meanwhile audio quality is compensated dynamically based on volume, eliminating distortion of signal and speakers, and providing a more authentic listening experience at any sound level.