Games have been a source of entertainment for mankind ever since. However, from tabletops to virtual reality, how we play games has changed extensively over time. Since its commercial birth in the 1950’s in the form of prototypes for video games to highly popular open-world games, Online Gaming has blossomed into one of the most profitable entertainment industries in the world today.

Online gaming means playing video games over a computer network, particularly over the internet. It can be played solo as well as in multiplayer mode. Compatible with both Pc’s and mobile devices today, Online Gaming has been a revolution in the history of games.

Many genres have been introduced in the world of gaming since its introduction, thus grabbing the attention of every individual irrespective of their age.

Technological innovations in both hardware and software development backed with an increasing Internet penetration across the globe have majorly contributed to the evolution of the online gaming industry. Advancements in various aspects such as graphics and experience enhancements in the gaming sector have further influenced the online gaming market growth.

Novel technologies such as Virtual reality and Augmented reality have played a major role in elevating the adoption rate for such games.More and more game developers across emerging economies are looking to constantly engage and improve the gamers’ experience by launching and rewriting new codes for diverse platforms across new channels

Thus, it is leading to a fierce competition in the gaming landscape: and thus proving to be a gamers’ paradise as a counterpart.

People have much more access to the internet now than ever and that’s the reason people are spending an enormous amount of time online. So, a tablet or smartphone coupled with an internet connection is influencing the growth of the online e-gaming market. 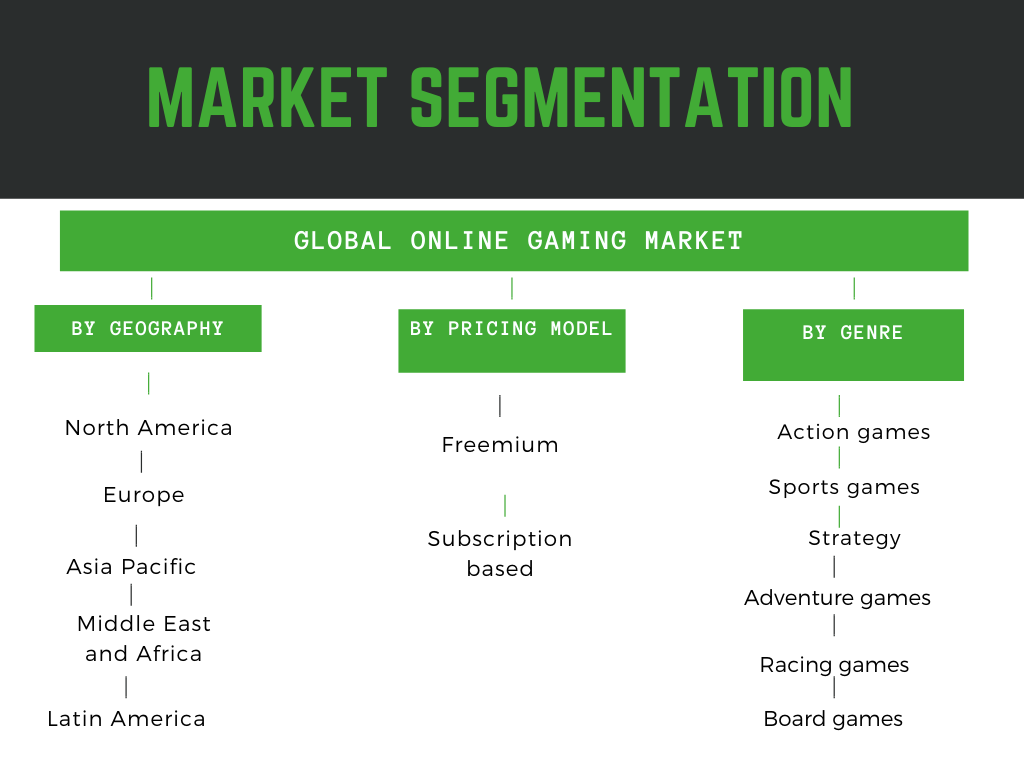 Impact of COVID 19 Pandemic: With the outbreak of the novel Covid19 and people stranded at home due to nationwide lockdown and travel restrictions, people have been forced to meet with their entertainment needs at home.

Online gaming industry is one of the few industries which in turn has greatly benefitted from this ban as people find ways to stay connected with their friends and family and find themselves indulging greatly into the world of online gaming. Games like PUBG and Call of duty which have the option of multiplayer gaming quickly garnered attention.

This period has seen a rise in the competitive gaming industry and with it the rise in digital sales of these online games and gaming devices, thus projecting a bright future for online gaming and its components as its demand continues to rise.

With such lucrative revenues and profitable margins, many new players have entered the market to provide for this demand, thus making it more accessible to the mass and further increasing its popularity. The use of virtual reality is constantly blurring the lines between fantasy and reality and indulging its audiences greatly.

One important factor that is hugely contributing to the rising demand for online gaming is the advent of cross platform gaming. Game developers are constantly trying to re-establish their position in the market by rolling out games that are compatible on more than one platforms such as Xbox, PCs and mobile phones further increasing its popularity and expanding their consumer base.

With the expansion of the online gaming market, the online streaming platforms have also seen an upward trend. As more and more people are indulging into online gaming, the demand for video game tutorials and play through videos has also witnessed a surge.

Several upcoming players, professional gamers and even celebrities are resorting to these platforms like Twitch and YouTube to reach out to their audiences and engage them into the world of online gaming as many audiences choose to live stream these videos proving to be a win-win situation for both.

This online streaming trend is expected to greatly boost the online gaming market. As per recent trends, it has also been noticed that many audiences prefer watching other players play.

There was a notable surge in live gaming stream recently, where notable players could showcase their gaming skills on a streaming platform such as Twitch and their fans could just sign up and watch them play. This demand for streaming services is further going to accelerate the demand and market for online gaming.

Many online gaming companies are putting efforts into the development of the new games and bringing in a lot of new software updates in order to keep their customer interested in the games as they have seen enormous gaming traffic on their games.

For example, Activision Blizzard, an online gaming company released its Call of Duty: Warzone online game as free to play version, compatible across PC, and gaming console and was able to generate huge amounts of revenue on the same. 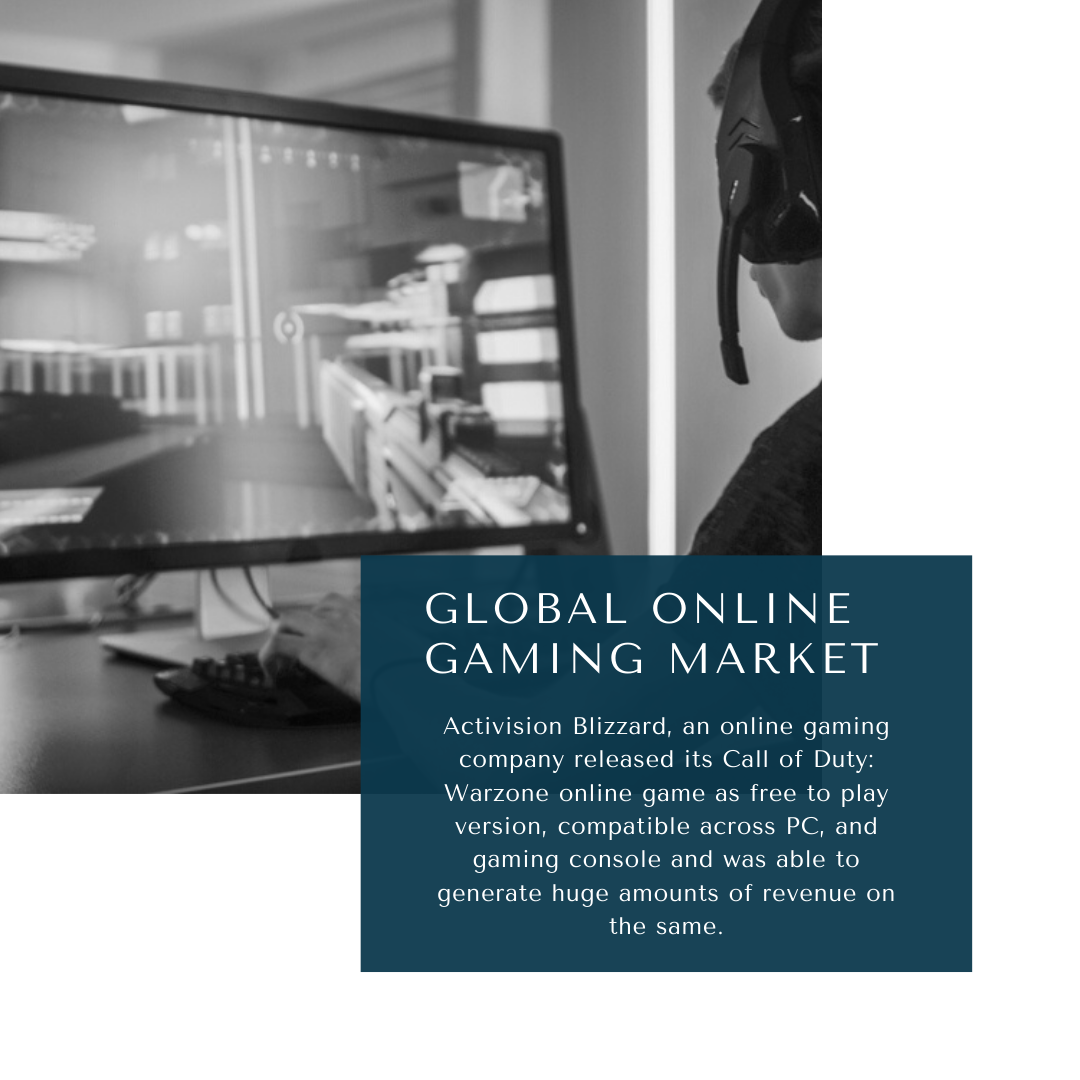 The company said that the game was downloaded about 15 million times within 3 days if its release. A considerable amount from this population consists of teenagers and school-going children who are left with very limited activities to do.

And, similar trends have been observed among other game makers companies as well. And these initiatives are the main reason for the inline e-gaming market’s growth.

COVID-19 is one of the main reasons for a sudden boost in the demand for online e-gaming. A lot of suppressing instructions including travel restrictions and business shutdowns are contributing to the same. So, a lot of people are staying at their home and spending time online and internet traffic is generally up by 25-30% than usual.

As per one of the reports given by Nokia, online gaming traffic has also grown significantly. A report shared by a U.S telecom company Verizon says that they found that gaming traffic is increased by 75% during the lockdown enforced because of COVID-19 situations all over the globe.

The smartphone market is growing tremendously at a significant rate which in turn is contributing to the global market globally. The online multiplayer games like Call of Duty, PUBG, CS Go have gained a lot of attention because of the social elements like teaming up with other players despite of being at different locations globally.

Electronic sports (eSports) are the tournaments planned for video game players. It’s a platform where a lot of players meet and compete with each other. Esports event includes competitive league tournaments. The Esports generate income through sponsorship and advertisements, tickets, media rights, and merchandise.

On the basis of platforms, the mobile segment witnessed the maximum contribution toward the growth of the e-gaming market and has the maximum market share.

On the basis of pricing models, the freemium segment is expected to show maximum growth and would contribute to the market over the forecasting period of 8 years. North America accounted for the highest share in the global e-gaming market. We can also find a lot of professional players in the same region.

Smartphone Gaming has exploded in recent years. The increase in the number of smartphone users coupled with a stable internet connection has risen quite significantly, which in turn is boosting the global online gaming industry. The online multiplayer games like that of PUBG and Call of Duty Mobile have recently become extremely popular among users due to the presence of its social elements.

People can team up with peers irrespective of their locations globally. These multiplayer formats engage their audiences by giving them the opportunity to socially interact with their peers and also give them a sense of achievement over other gamers.

In addition, the advancement of technology in this aspect and the advent of cloud gaming and virtual reality has made it possible for mixed reality features and real time user experience of gaming on a smartphone as gamers today are preferring games on mobile devices more. It gives them the option of faster gameplay thus catering to the needs of millennials for instant results and instant gratification of their needs.

The explosive growth of social media in the 21st century has further fostered the growth of the online gaming market creating more buzz and attracting new potential audiences.

Mobile gaming is thus the fastest growing segment in the online gaming market with the lowest barrier in entry and less room for delays in developing and processing due to Covid19, proving to be a more cost-effective opportunity for developers, gamers and publishers alike.

Asia Pacific region is emancipated to hold the largest market share in the online gaming industry where countries such as China, Japan and South Korea show great potential in market growth.

Chinese Enterprises like that of Tencent Holdings and Nintendo are looking to take up any business opportunity in this regard and remain relevant in the industry to generate enough users’ gaze and even attract new players into the market.

The gaming industry is thus proving to be a functioning ecosystem of its own: with many collaborations and partnerships for mutual benefits. This ecosystem creates dozens of revenue streams for the industry as a whole and great opportunities for growth.

The online gaming market is highly fragmented as the demand for online games and rising penetration of smartphone usage across various regions is catering to an intense rivalry in the market.

These companies are largely focusing on building and developing more engaging gaming content and next generation gaming experiences.

Several companies such as Onlive, G-Cluster, StreamMyGame, Gaikai, and T5-Labs are already offering commercial cloud gaming services. This new sector is also seen as a serious competitor for the traditional game market.

Some of the popular consoles developed by these companies are XBOX One by Microsoft corporations, PS4 (Play station 4) and Wii U by Nintendo  Co., Ltd. And these market players are focusing on delivering to the customers is product differentiation and innovation with a view to increasing their market share.

With the competitive market and a lot of big players in the market offering a fruitful experience to their customers with games like PUBG, Call of Duty and others the E-gaming market is expected to grow tremendously in the coming years.