Used Cars have been of major importance in recent years with the pandemic affecting the basic lifestyle and buyable range of various consumers in terms of reference towards automobile sales. Used cars are more preferential for new or first-time buyers of automobiles in various regions of the world as this helps in inculcating the required User driveable experience which would have a positive impact on a long-term usage time frame. 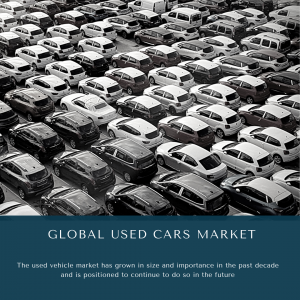 The  development of the Internet has changed the power struggle between dealers  and consumers in terms of requirements towards the User cars segment of the European Nations.  Buyers can now potentially gain the upper hand. Customers are increasingly knowledgeable about cars, their quality, residual value, prices  applied,  finance  charges,  availability,  and,  more  and  more  frequently,  the  exact  profit margin that  the  dealer makes  in  closing a  deal.

To know more about Used Car Market in US, read our report

The  most  important success  strategy in  the  used car  business  is  the development  of trust-inducing  initiatives  such  as  certified  used  vehicle  programs.  These  programs  provide  the  best protection against  channel competition and  allow dealers  to improve  margins significantly while offering an additional source of revenue for OEMs.

In the past, vehicle manufacturers and dealers have preferred to omit used automobiles from their operations, believing that the focus of dealers’ sales efforts should be on new cars, which have higher price tags and are targeted at richer consumers. Aiming to push new automobile inventories to the market with suitable incentives has been a goal of dealers and original equipment manufacturers (OEMs).

Dealers’ bottom lines, on the other hand, have benefited more from the sale of used vehicles than from sales of higher-status new cars. As used automobile quality and dependability have improved, a loyal client base has been created. Because of this, automakers began to recognise the importance of used vehicle management in increasing residual values, new car sales, and manufacturing.

The used car market is most active in the European Union Nations,  France, and the UK. In these markets, the used  car  business generates  considerable  economic income.  In  contrast,  the used  car market  is weaker in Canada, Japan, and Spain. In  Europe  dealers  have  experienced  high  rates  of  consolidation,  largely  due  to  the  Block Exemption  legislation,  which  came into  effect  in  2002.  Sources  indicate that  the  number  of  franchised dealer  sales  outlets in  France declined by  about  17%, while  the number  of  German  outlets  declined  by  approximately  18%.

The European used car market generated total revenues of $268.3 billion in 2007 with a generation of  total  sales  volume  of  16.3 million units, equivalent to 56.8% of the market’s overall volume. But in the recent year, there has been a blockade placed upon the Manufacturer dealer networks in both Europe and North America  have experienced consolidation in recent years, a process that has been historically characteristic of the automotive industry and is likely to continue.

The Other main agenda of development for used cars within the market has been through the auction on platforms of varied levels. Used  car sales  via auctions  are  mainly  developed  in England  which used to be part of the European Union till January 2021 and  to  a  smaller degree  in  Germany  and  Holland and  are  emerging  in  other  countries.

The Global Used Cars Market can be segmented into following categories for further analysis.

By Product Re Usage

The used vehicle market has grown in size and importance in the past decade and is positioned to continue to do so in the  future. A successful used vehicle  strategy on the part of automakers  and dealers is becoming essential to their operations and is increasingly recognized as such.

There have been some core  strategies being implemented  that  are essential  for  growing dealers’ used  vehicle  sales in the European Market in the recent years which includes Continually  improve  the  customer  experience,  from  the  Internet  to  the showroom,  rationalize  customer  relationships  through  CRM,  perfect  online  promotion  and merchandising  efforts to  reach  prospects  and existing  customers,  manage inventory  and pricing with network-wide IT solutions, maximize high-margin sales opportunities, optimize certified used vehicle programs.

The Recent integration of technology has to be followed alongside the integration of a branded OEM Dealership to have better notion of the complete market operability in terms of increased sales in European markets. There has been focus placed upon having this value-added service being integrated into the used cars market of the Union.

The urban customers would have better saviourism towards the OEM affiliated branded dealerships. The internet portals did not have a visible share. It looks like the customers looked to the information on the internet but concluded the transaction at a physical dealership. It must also be said that the identification of a customer who transacted in a conventional dealership as opposed to a web portal is relatively lower when integrated directly into a non-branded platform dealership. It is, therefore, likely that there is a certain amount of bias away from the buyers on the internet.

Used automobile purchasers are increasingly turning to the Internet as a source of information. Consumers still utilise local media and word-of-mouth to investigate used car purchases, but they are increasingly turning to the Internet, underscoring the necessity of having a solid Internet strategy for used vehicle programmes in general. A growing number of dealers report that their Web operations have boosted sales and expanded their trading range, thanks to their increased attention to multi-channel communication techniques.

There is a 50/50 joint venture between Turkish industry and service organisation and a U.S.-based supplier of used vehicle services to supply wholesale purchasers with Web-based second-hand automobile sales services. Turkish Borusan and U.S.-based Manheim have teamed together to develop a new service called Borusan Manheim. A global leader in used automobile sales, Manheim has operations in 17 countries.

Cars24 has been one of the most advanced solution providers in the used car requirements. It’s like Uber / Ola (taxi aggregators), Zomato / Swiggy (restaurant aggregators), and Airbnb / OYO (hotel aggregators) (aggregators in the hospitality segment). All used vehicle dealers/brokers are gathered on a single online bidding platform. Price discovery is improved by dealer rivalry. It has been trying to expand its operations, it makes sense to collaborate with big dealers, which are usually organised / semi organized in nature. As a result, their bidding platform has a high share of organised / semi organized dealers vs. unorganised dealers.