That’s the basic principle of which Fuel cell works

There are four basic elements of a PEM Fuel Cell:

The anode, the negative post of the fuel cell, has several jobs. It conducts the electrons that are freed from the hydrogen molecules so that they can be used in an external circuit.

It has channels etched into it that disperse the hydrogen gas equally over the surface of the catalyst. 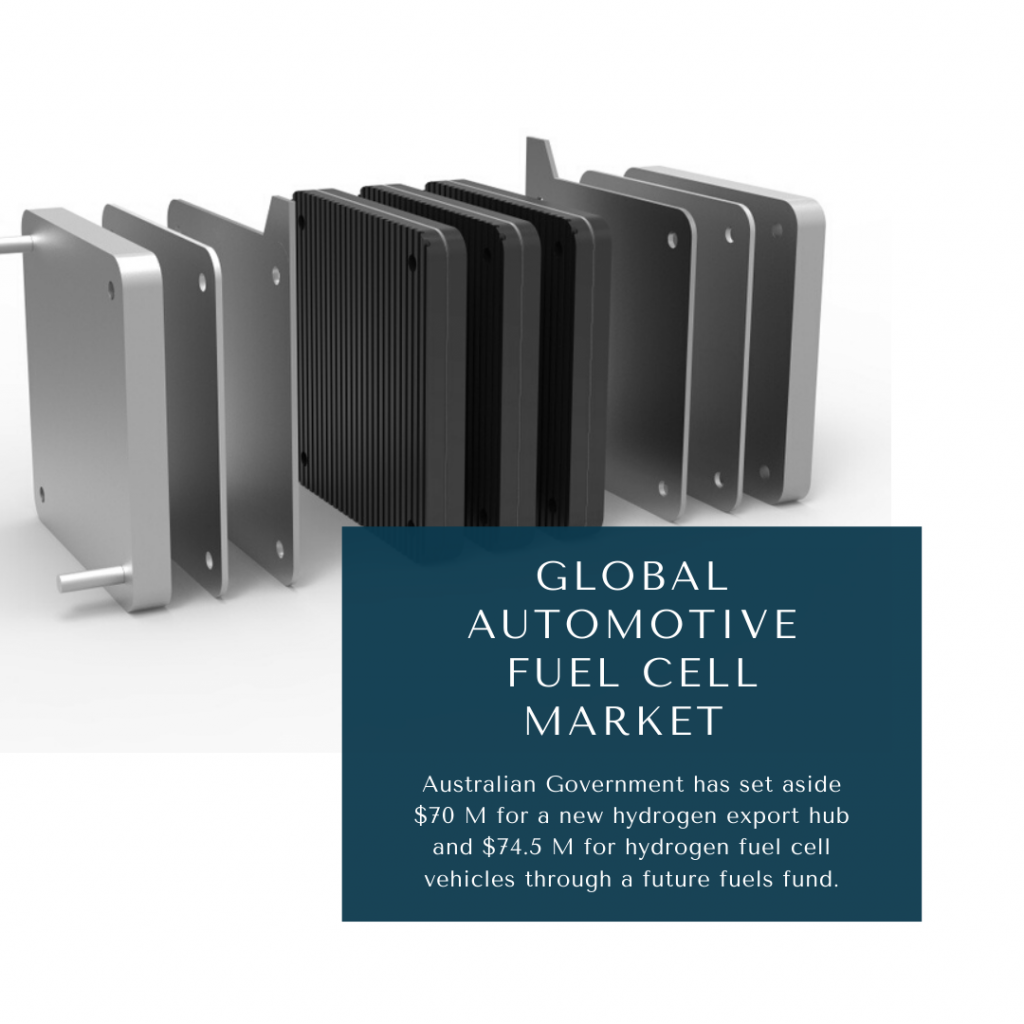 The cathode, the positive post of the fuel cell, has channels etched into it that distribute the oxygen to the surface of the catalyst. It also conducts the electrons back from the external circuit to the catalyst, where they can recombine with the hydrogen ions and oxygen to form water.

The electrolyte is the proton exchange membrane. This specially treated material, which looks something like ordinary kitchen plastic wrap, only conducts positively charged ions. The membrane blocks electrons. For a PEMFC, the membrane must be hydrated in order to function and remain stable.

The catalyst is a special material that facilitates the reaction of oxygen and hydrogen. It is usually made of platinum nanoparticles very thinly coated onto carbon paper or cloth. The catalyst is rough and porous so that the maximum surface area of the platinum can be exposed to the hydrogen or oxygen. The platinum-coated side of the catalyst faces the PEM.

Advantages of the technology

Disadvantages of the technology

There are also safety concerns about the use of hydrogen because it is highly flammable.

China is pushing for fuel cell development throughout the country. Subsidies are available and incentives are provided for developing fuel cell vehicles. There is a set-up of the hydrogen power corridor across China.

China plans to have one million FCEVs on the road and 1,000 hydrogen refuelling stations by 2030, with heavy vehicles a priority. Toyota started a joint venture in China along with Beijing SinoHytec. Toyota will soon start manufacturing fuel cell components in China and this will be the first time production of fuel cell components will be outside Japan.

Chengdu and Chongqing are applying for government subsidies to develop a hydrogen corridor. Shanghai, Foshan, and Beijing are also cities focusing on using fuel cell vehicles throughout the city.

Government hopes for cities and OEMs to capture the incentive and subsidies creating competition for developing technology. Great Wall Motors is launching itself in the hydrogen power sector and plans to be among the top 3 global market leaders in 2025 in using hydrogen energy

South Korea has looked into developing fuel cell vehicles for more than a decade. At Seosan, South Chungcheong Province a 50 MegaWatt secondary hydrogen fuel cell power plant is being constructed .

Johnson Matthey after incurring losses for over 20 years manufactures fuel-cell components has started to make strides in the industry due to the policies of China boosting the hydrogen powered automotive industry. The Chinese government plans to integrate 1 million fuel cell vehicles with focus on trucks and buses within a decade.

The South Korean government and other OEMs based in the region are expected to invest approximately $2.33 billion during the next five years to accelerate the development of hydrogen fuel cells in order to develop an FCEV ecosystem.

In February 2021, Ballard Power Systems came in a non-binding joint memorandum of understanding (MOU) with the Chart Industries Inc. for the development of integrated solutions for fuel cell engine with onboard liquid hydrogen storage and vaporisation for the automotive transportation industry which will primarily be used for heavy-duty applications such as trucks, buses, marine vessels and railway.

In January 2021, the company Ricardo announced an initial investment worth $3.4 million in order to build a hydrogen fuel cell development and testing facility to be incorporated at the Shoreham Technical Centre in the UK. The new unit is set to support the company’s existing projects in the fuel cell industry and for the development of alternative fuels.

Bloom Energy and SK Engineering and Construction have powered two fuel cell complexes in the Gyeonggi province of South Korea. The fuel cell technology development is jointly funded by government and private agencies to incorporate advantages from both sides.

The fuel cell development will also include automobiles as well as general energy supply.

In USA, California set aside $39.1 Million for Hydrogen Fuel Stations to create 36 new hydrogen fuel cell stations. Fuel cell drivers are eligible for a federal tax credit of up to $8,000 and a rebate from the state of $4,500

Japan is the leader in the development of fuel cells and has sold Mirai and Sora for over 5 years. For the Olympics, Japan built as many as 35 hydrogen fuel stations in Tokyo alone with a goal of 80 stations and 100,000 fuel cell vehicles in the country by 2025.

Germany plans to invest 9 billion euros ($10.6 billion) while for France and Portugal the figure is 7 billion euros each. Britain plans to spend £12 billion ($16.6 billion) for fuel cell development and hydrogen stations.

The European Union is aiming to push hydrogen’s share of its energy supply from 2% currently to 12-14% by 2050. Germany is approaching Morocco to use solar power to make hydrogen. The Green Spider and Green Flamingo projects are developing maritime highways for hydrogen and gas pipelines to link Spain and Portugal to northern Europe.

The sale and manufacture of new vehicles came to a halt due to the lockdowns and restrictions put in place to curb the COVID-19 pandemic during the initial breakdown. The OEMs waited to resume the production activities until after the lockdowns were lifted which has greatly affected the economy. The manufacturers had to adjust the volume of production which affected the liquidity issues faced by many Tier 2 and Tier 3 automakers.

The automotive industry is mainly run by the investments and capital incentives for their operations to run smoothly. As during the outbreak restrictions were put in place that hampered the production activities, it caused lower demand and unprecedented impact on the FCEV manufacturers as well as the automotive fuel cell manufacturers. Due to the pandemic, countries imposed lockdowns which were lifted based on levels of clearance to resume necessary production activities with pandemic protocols.

However, the automotive industry did not take a huge plunge, OEMs did not report major losses, only a few companies recorded loss in revenue. The demand for vehicles increased by the end of the year 2020 which recovered most of the companies. The demand for the fuel cell EV from Toyota rose during the second half due to huge demand for low-emission vehicles. The company is now working on developing more efficient fuel cells for the new Mirai FCEV as well as to sell the fuel cell to other OEMs as part of the company’s environmental vision of 2050.

Due to the push received by various governments, the automobile industry will have a minor shift towards fuel cell vehicles in the next 5 years mainly in China, Japan and South Korea.

The global outreach will take some more time and in the next 15 years fuel cell vehicles will be popular on roads. The main difficulty of storage and fuel cell stations will be key for the widespread reach of this technology.

The governments across the world are providing incentives for the development of infrastructure for hydrogen fuel cells to provide OEMs with the opportunity to produce more and expand their revenues. The market in the Asia-Pacific region is expected to grow with a steady pace due to high demand for low emission and economical vehicles. The market in the North American region is by far the fastest growing market which is due to numerous incentives provided by the government and high performance of the automotive industry.

The global automotive fuel cell market is estimated at $XX Million in 2020, growing at –% CAGR till 2026.

The company Toyota in March 2021 partnered with Hino Motors for the development of heavy duty fuel cell trucks. Under the agreement, Hino Motors will feature the company’s Polymer electrolyte fuel cell stacks in the Profia truck.

The company Robert Bosch GmbH in March 2021, announced that the company is planning to develop automotive fuel cell system components and to commercialize them by the year 2022. The company is also developing hydrogen fuel stacks along with integrated systems to combine the key components of fuel cell vehicles including hydrogen air valves and gas injectors.

The company has also entered into a partnership agreement with Apex clean energy for the development of a 345 MW wind power purchase as well as a production facility for green hydrogen. The plant is anticipated to produce 30 metric tons per day of clean liquid hydrogen which will be enough to fuel over 2000 light commercial vehicles. The company has also partnered with BAE systems for the supply of zero emission powertrains for heavy duty transit buses which will integrate Plug power’s ProGen fuel cell engines into BAE system’s smart electric drive systems.

The company Cummins Inc. acquired the fuel cell and hydrogen production technology provider Hydrogenics in September 2019 taking up the company’s development in the hydrogen fuel cell domain. Cummins released the second quarter results for the year 2021, with revenues worth $6.1 billion which was a significant increase in approximately 59% from the same quarter in 2020. The total sales in the North American region increased by 74% while the international revenues increased by a whopping 42% which is due to increase in the global demand.

In July 2021, the company Cummins signed a memorandum of understanding (MOU) with Air products which is a leader in supply and transportation of hydrogen. Under the agreement, the joint venture will work together to accelerate the development of hydrogen fuel cell trucks in the US, Asia and Europe. The company also signed an MOU with Chevron products to develop commercially viable business opportunities in hydrogen and other alternative energy sources. The company is all set to acquire 50% equity interest in Rush Enterprises in the department of Momentum fuel technologies.