An autonomous vehicle is also known as a self-driving vehicle, a driverless vehicle, or a robotic vehicle. Over the last several years, automation technology has been updated on a daily basis, and it has been used in many facets of everyday human existence. Humans are hooked to automation and robotics technology in areas such as agriculture, medicine, transportation, car and manufacturing sectors, information technology, and so on. 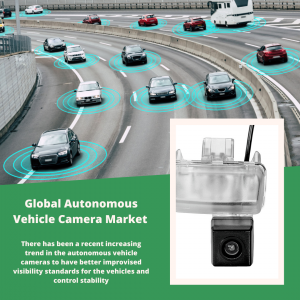 Conventional on-board cameras, such as a back monitor, were primarily employed as a “view camera” to correct for blind spots while driving. Picture Recognition technology has considerably advanced in recent years, allowing it to recognise vehicles, pedestrians, traffic signs, and other objects based on digital image data captured by a camera, urging the driver to alert or issue a caution. In some instances. It has become a function as an input sensor for directly controlling a car, that is, as a sensing camera.

Autonomous vehicle implementation is just one of many trends likely to affect future transport demands and impacts, and not necessarily the most important. Their ultimate impacts depend on how autonomous vehicles interact with other trends, such as shifts from private to shared vehicles. In addition to ADAS (Advanced Driving Support System), three-dimensional recognition of the running environment of the vehicle is becoming important to realize AD ( Autonomous Driving ).

For this reason, it is necessary to accurately extract the depth information of the shooting scene. Stereo cameras can grasp the depth information more accurately by its structure. Autonomous cars rely on cameras mounted on all four sides front, back, left, and right to provide a 360-degree picture of their surroundings. Some have a large field of vision up to 120 degrees but a limited range.

Others concentrate on a narrower field of vision to offer long-range images. Some vehicles even have fish-eye cameras, which have super-wide lenses and give a panoramic picture. The various levels of technological integrations noticed in the vision cameras have been the sensor improvements.

Sensor fusion is used by self-driving automobiles to do this. The sensor inputs are sent to a high-performance, centralised AI computer, such as the NVIDIA DRIVE AGX platform, which aggregates the required data for the car to make driving choices. Autopilot’s enhanced safety and convenience features are intended to help you with the most difficult aspects of driving. Autopilot adds new functions and enhances current ones to make your Tesla safer and more competent over time. Autopilot allows your vehicle to autonomously steer, accelerate, and halt within its lane. Current Autopilot functions need active driving monitoring and do not operate autonomously.

The Global Autonomous Vehicle Camera Market can be segmented into following categories for further analysis.

By Level of Autonomy Type

While autonomous cars give precise sights, cameras have limits. They can discern features in their surroundings, but the distances between those details must be computed in order to know exactly where they are. Camera-based sensors also have a more difficult time detecting things in poor visibility situations such as fog, rain, or at night.

One of the most recent technological integrations has been the sensor-based technologies being improvised and mobilised into the cameras placed onboard the autonomous vehicles. Radar sensors can augment camera vision in low-visibility situations, such as at night, and enhance detection for self-driving automobiles. Radar, which has traditionally been used to detect ships, aeroplanes, and weather patterns, operates by sending radio waves in pulses. When the waves collide with an item, they return to the sensor, delivering information on the object’s speed and location.

However, for complete driverless capabilities, a sensor that detects distances using pulsating lasers has shown to be quite beneficial. Lidar enables self-driving automobiles to get a 3D image of their surroundings. It gives structure and depth to the automobiles and people around it, as well as the road topography. And, like radar, it performs admirably in low-light settings.

Autonomous vehicles (AV) in the form of shared transport services (e.g. car sharing and ridesharing) can form a viable alternative to the personal car. If the user uptake of shared AVs is high, they can have a substantial impact on traffic related to personal mobility in cities. There has been a recent increasing trend in the autonomous vehicle cameras to have better improvised visibility standards for the vehicles and control stability.

Continental AG has recently introduced a new generation of autonomous vehicle cameras known as the MCF500. The camera platform is modular, scalable, and interconnected, and it offers solutions ranging from advanced driver assistance functions (e.g., NCAP 2020) to Highly Automated Driving (HAD). It has exceptional night vision, a high picture quality of up to eight megapixels, and a broad field of view of up to 125 degrees, allowing cross-traffic items (vehicles, bicycles, pedestrians, and so on) to be spotted sooner.

The other major stakeholder has been the Eye Net Technologies based Vehicle to X Tracking Platform. Eye Net provides collision warnings between vehicles equipped with its tech, whether they have cameras or other sensing tech equipped or not. Eye Net’s sensors detect the position of the devices on both vehicles and send warnings in time for either or both to brake.

Brightway Vision, for example, goes multispectral to address the issue of standard RGB cameras having restricted vision in many real-world circumstances. In addition to regular visible-light images, the company’s camera is linked to a near-infrared beamer, which scans the road ahead at predetermined distance intervals several times per second.