China after spending $3 Billion in subsidy expenditure in 2018 has raised technical threshold for the same. For instance, an EV purchased by a commercial fleet user would be given subsidies only if its aggregated driving range exceeded 20,000km per annum. Additionally, automakers are required to build platforms for monitoring operational status of vehicles sold and connect them with a national regulation platform that was launched in 2016. As the EV market slowed down in H2-2019, due to subsidy cut, finally dragging down full year- 2019 EV volumes, the EV startups were most affected. For example, WEY had set itself a target of 100,000 units EV sales but ended up selling just 17% of that.

Starting 12th June 2019, when new subsidy rules came into effect, sales of A00 compact EVs dropped sharply pulling down the overall EV volumes by a steep ~50% in July. It was only post Q3 2019 when almost all car companies upgraded their compact EVs to >250km range that the EV sales started rebounding. In Nov 2019, sales grew ~20% (MOM) and in December it grew by ~70% (MOM). 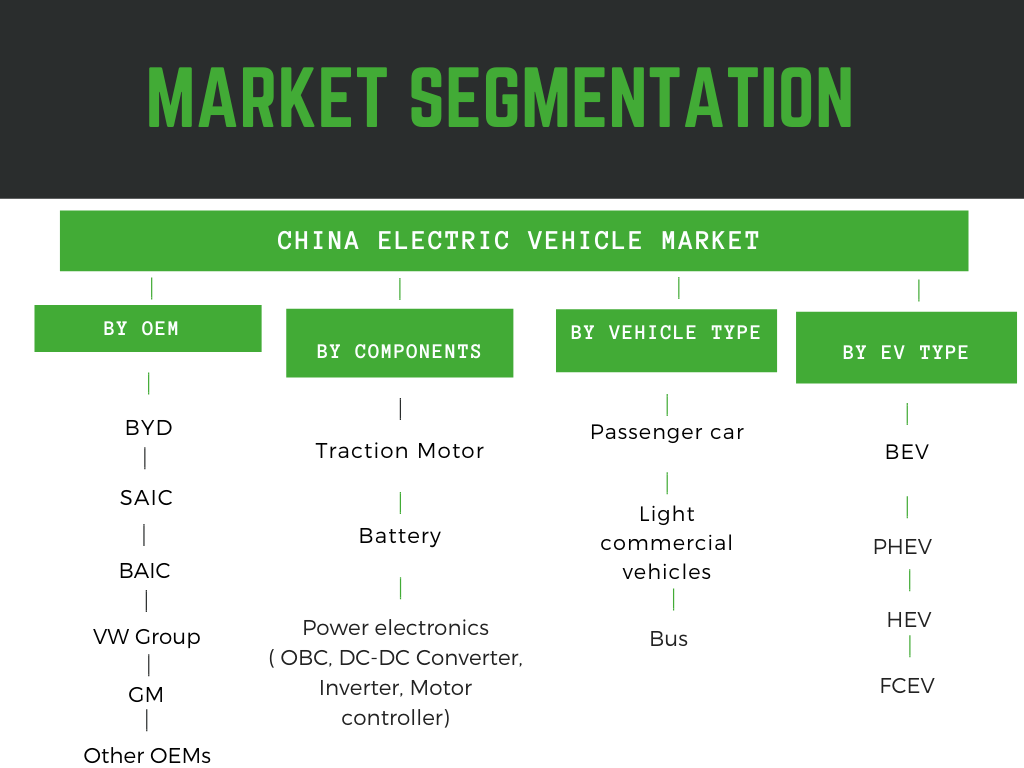 China electric vehicle market is estimated at $45 Billion in 2019. The Chinese EV battery market alone is estimated at $9.3 Billion. To know more about it read our report EV Battery Market in China  In 2020, SAIC-GM(2nd biggest EV player in China) will launch 10 new models, including 2 BEVs. By 2025, SAIC-GM will invest $4.5 Billion to launch more than 9 new energy models.  BAIC BJEV has developed three EV platforms, BE11, BE22 and BE22, which will underpin more than 30 vehicles by 2025.

The Chinese major, SAIC has plans to start EV manufacturing in India and Thailand. Since SAIC is well positioned to absorb the higher cost and low margin of EVs presently, we believe it can boost EV uptake in both India and ASEAN region. BYD(18% market share in EV passenger cars) declined by 4% YOY to 219,000 units  in 2019. It had 9% share of Electric bus market in China.

How many Electric Vehicles were sold in China in 2019?

How many Electric buses were sold in China and who was the market leader?

Who is the Market leader in China EV battery market?

CATL is the market leader with more than 40% market share.

Which OEMs are the leaders in BEV and PHEV sales?