China overtook U.S. in 2015 to become the world’s biggest market for EVs (electric vehicles). In 2019, ~1.2 Million EVs (BEV+PHEV) were sold in China, a de-growth of 4% YOY. Despite, a decline in 2019, it is expected that by 2025, EV sales could exceed 5 million or 20% of total annual new car sales. Now, how is it that only China is confident about reaching this goal. Why not US, Europe or even Japan? The reason is, its well-established EV battery supply chain.

As soon as China became the biggest auto market in 2010, displacing US, the annual market size became 30% bigger than US market, there was an insatiable demand for gasoline. But, unlike US which generates a large chunk of oil from domestic shale production, China is still dependent on imports. The growing annual gasoline car sales made China world`s biggest importer of crude oil and thus kick-starting the EV movement. The  shift to EVs is driven more by energy security than anything else. 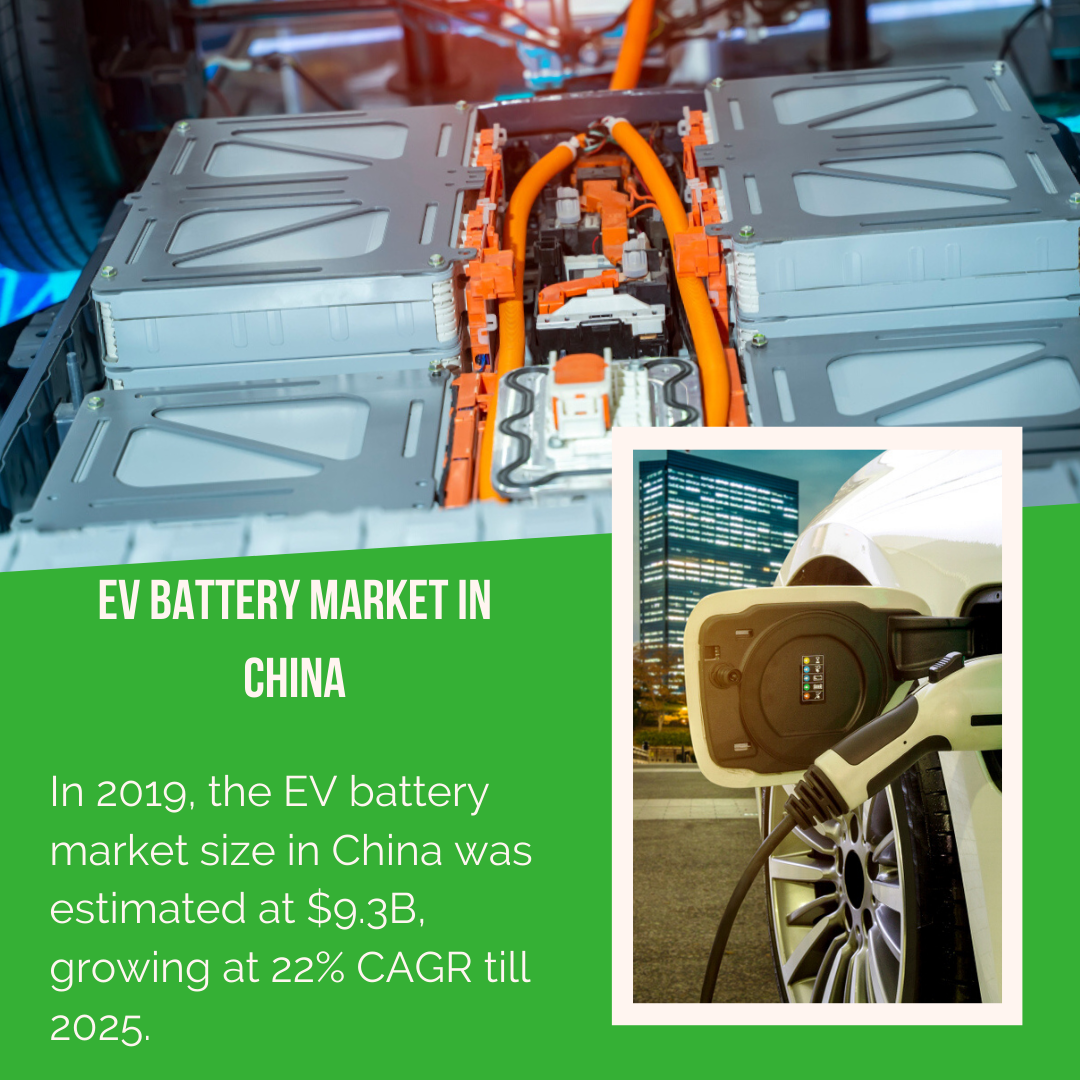 As of now, the global Lithium-ion battery production is centered in Asia, which is the hub of global consumer electronics production. But, as European automakers plan aggressive EV launches in coming 2-3 years, many Asian suppliers are establishing EV battery production base there, to cut down on delivery time and logistics cost. 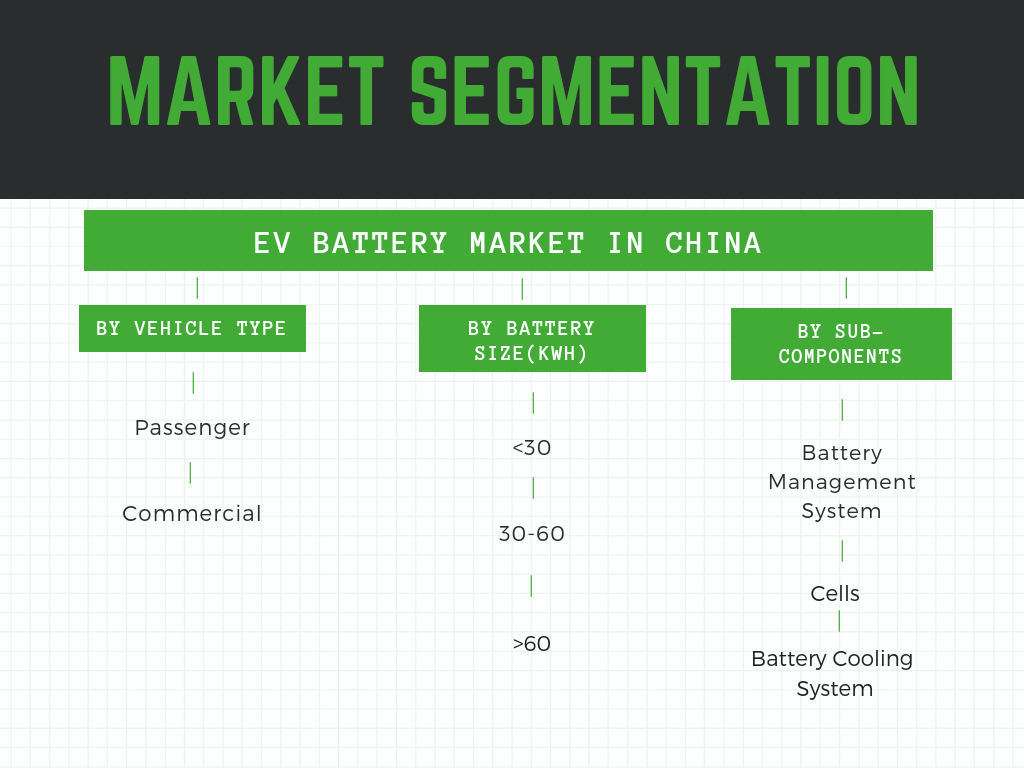 The EV battery market in China is driven by government mandates and incentives rather than consumer demand. Be it, cash incentives or the government`s protectionist policy to allow subsidies for vehicles having batteries built only by domestic company.The importance of government incentives in EV sales could be judget by the fact that in H1-2019 the EV sales in China grew by more than 30% YOY but after subsidy cut in March 2019, the market declined by similar percentage in H2-2019,dragging the overall EV sales by 4% for Full year- 2019.

In 2017, the Chinese government, spent world`s highest, ~$12 Billion, only on EV subsidies and incentives, which was brought down to $3 Billion in 2018. The incentives offered vary as per the range of the vehicle. The ones with more than 249 miles of range get ~$8,000. 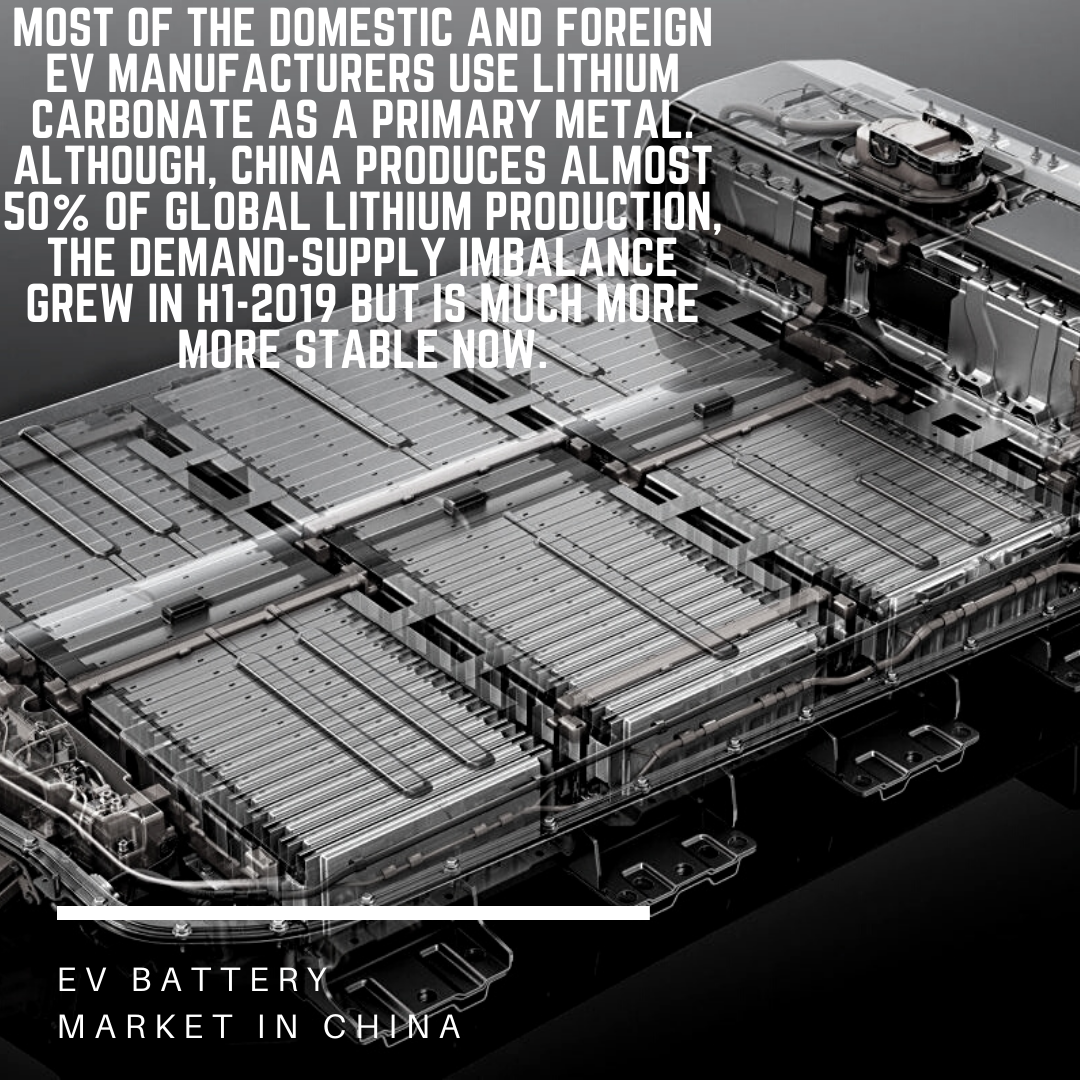 Most of the domestic and foreign EV manufacturers use Lithium carbonate as a primary metal. Although, China produces almost 50% of global Lithium production, the demand-supply imbalance grew in H1-2019 but is much more more stable now.

There are downsides to the EV battery market in China as well. Till Oct`19, there were ~3.5 Million EVs (BEVs+ PHEVs) on road. About 75% of the EV fleet is registered by private buyers whereas the rest are commercial vehicles, mostly buses. Now, the bigger question is “how to recycle the used Lithium ion batteries?”

The Chinese government has created a “traceability management platform”, which will track the complete life cycle of electric car batteries; from production to disposal. It also made the EV manufacturers responsible for setting up the infrastructure for collecting and recycling used batteries.

Majority of the locally produced EVs were low speed vehicles with a typical 25-30kWh battery capacity till 2018. But, early 2019 onward, there a significant market shift towards high capacity batteries in both BEVs and PHEVs. For example BYD Tang PHEV is now offered with 19/24kWh battery and most of the BEVs have a 50-60kWh battery pack. The average battery capacity of BEVs sold in China in 2019 went up to 42kWh  from 28kWh in 2018.

EV battery prices now globally average between $150-$175/kWh. For a 60kWh battery spec EV (210+ mile range) , the battery still makes up for a very important $9,000-$11,000 component. About 8 OEMs are collectively studying the future prospects of Solid-state battery in EVs, but so far, the results are inconclusive. Find our thoughts on EV solid state battery market

In 2018, Chinese EV battery production was 55.1 GWh, which grew to 62GWh in 2019. This increase in battery production will result in massive demand for nickel, cobalt, manganese and lithium. The upcoming launch of luxury vehicles with 80-95kWh battery capacity will be major growth driver for EV battery market in China. There are many Chinese OEMs who have set up a completely new brand, just to challenge the likes of Audi, BMW and Tesla in the luxury EV space. Examples include NIO, BYTON, Xpeng Motor, Kandi etc.

The EV battery market in China has 8 major players.The homegrown Chinese battery company CATL (Contemporary Amperex Technology Ltd) is not just China`s biggest player but world`s biggest. It overtook BYD and Panasonic as world`s biggest EV battery supplier in 2017.What`s truly remarkable is the fact that, the organization was founded only in 2011.It supplies batteries to almost all the domestic EV manufacturers except BYD.

The EV battery business in China seems so lucrative right now that even BYD spun off its battery business as a separate entity in 2017, to be able to supply to other OEMs. The Chinese battery manufacturers do have the scale but not the technology. The subsidies offered by the Chinese government to battery manufacturers will end in 2020 which will ultimately open the market. 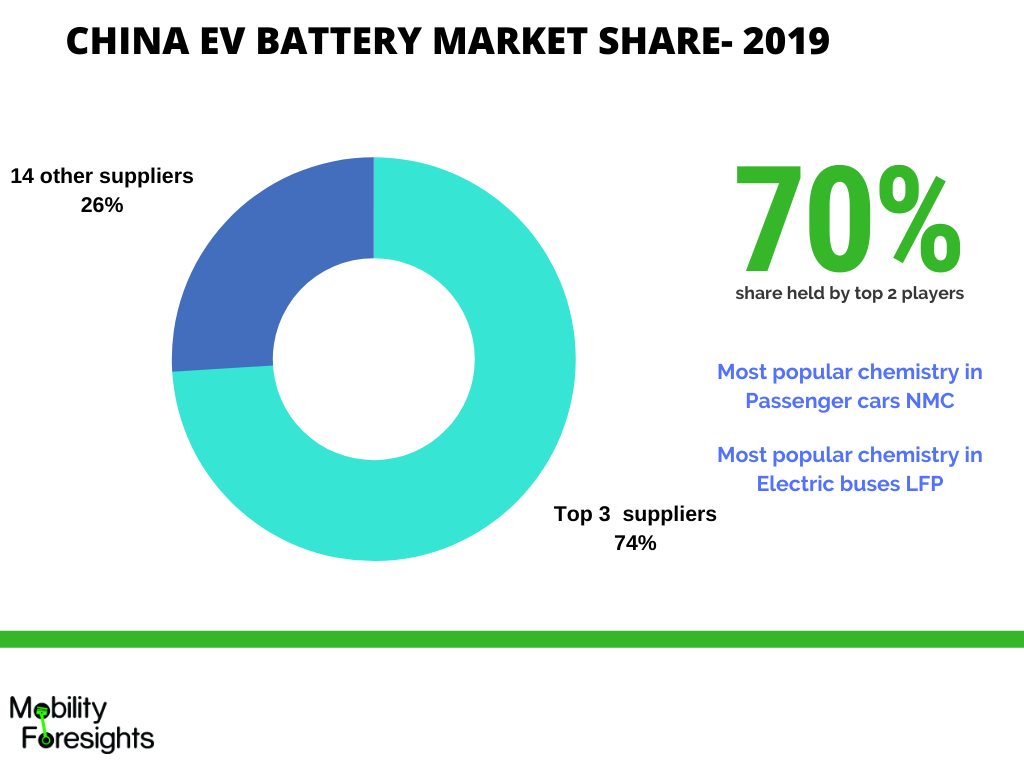 In terms of mergers and acquisitions, we expect more developments like VW acquiring 20% of  Guoxuan High-tech Co Ltd, as more OEMs accelerate their electric push into the world’s largest EV market and get a battery manufacturer to better manage their supply chain. It also increases their bargaining power which will ultimately decide their profitability in EV segment.

The Chinese EV battery producers manufactured ~ 57% of global production in 2019. It is expected to go past 60% by 2020. To know more about global EV battery market, read our report. Among foreign battery manufacturers, LG Chem has the biggest 2GWh production capacity in China.

THIS  REPORT WILL ANSWER  THE FOLLOWING QUESTIONS