As fossil fuel powered engines get closer to prohibition, many OEMs are looking up to vehicle electrification as a saviour. Battery powered electric vehicles will not become mainstream unless battery costs come down to <$100/kWh and fast charging infrastructure becomes a common place. Now, that leaves manufacturers with a bridge gap or a “hybrid” solution.

A 48V Mild-hybrid/Plug-in hybrid architecture can result in 10%-16% increase in fuel economy at an added cost of 6%-12% of vehicle. In any case, hybridization warrants a DC-DC converter as well as an inverter in a vehicle. 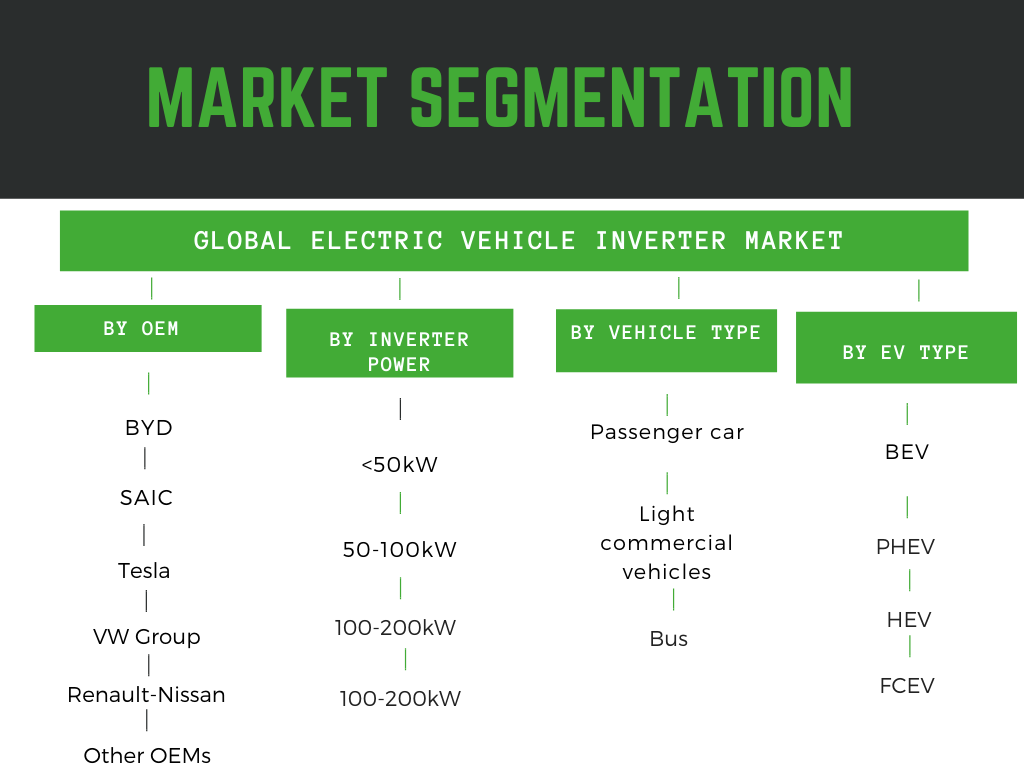 The range of a battery electric vehicle is related to the efficiency of the main inverter. China is the biggest BEV market globally, but after steep cuts in subsidy in March 2019- Now only BEVs with a min 250 KM range are eligible and the subsidy on BEVs with 400KM range has been halved to $3.8k(25,000 CNY) from $7.5k( 50,000 CNY). This move proved to be deadly blow to the booming EV market and as a result, the full year 2019 EV sales in Chinese market de-grew by 9.6% at 1.2 Million units.

Europe was the fastest growing EV market in 2019, with total sales over 0.5 Million units, a 25% YOY growth. Hybrid electric vehicles( with a traction motor) sales have grown by 29% CAGR during 2014-2019, fastest among all  electric/electrified vehicle category. HEVs now account for 0.6-0.7M annual sales taking the share of electric and electrified vehicles in Europe to 6.7%.

BEVs are the  #1 trend worldwide , they accounted for 71% of overall EV sales and the average battery pack size went up to 44kWh from 32kWh. Since, the range of an BEV is closely related to the efficiency of the main inverter. This fundamentally implies that more powerful and efficient inverters will be required in coming years.

PHEV sales(with comparatively lower voltage battery packs) in Europe and China have fallen by 7.5% and  8.1% respectively in 2019(YOY)

In terms of volume, the Electric vehicle inverter market size was estimated at 4.8 Million units in 2019, growing at 23% CAGR to 2025.

Japan is the single largest market for HEVs with over 1.3 Million units sold per annum. Toyota is the market leader in its domestic market as well as European market.

BYD with global EV market share of 10% in 2019 has already showcased its heavily invested in third-generation semiconductor material SiC based IGBT4.0 technology. It is 15% more efficient and losses are reduced by 20% as compared to many other OEMs.

In US, Karma Automotive entered the final stage of development for two new Silicon Carbide (SiC) Inverters.The SiC traction inverters will be used in Karma vehicles and other partner OEMs. The flexible architecture of 400V design can also be customized to fit various vehicle platforms and upscaled to 800V.

Delphi`s new inverter has double-sided cooling, which makes it 40% lighter and 30% more compact than other inverters. It has partnered with silicon carbide semiconductor maker Cree in a deal that will allow production of inverters at a much higher scale by 2022. US based Cree Inc  has the world’s largest silicon carbide device manufacturing facility in New York.

Going forward, we expect the role of semi-conductor suppliers will get bigger than ever and auto suppliers will rely on them for innovation in electric vehicle inverter market.