The Indian steel industry is considered as one of the few bright spots in the global steel industry. The steel industry in the country revived from the demonetization and the goods and services tax reform and is growing at a rapid pace. India was the world’s second largest steel producer with production standing at 111.2 million tonnes in 2019. The growth in the Indian steel sector has been driven by domestic availability of raw materials. Subsequently, the steel sector has been major contributor to India’s manufacturing growth.

India steel market expected to have high growth rate over next ten years on version of government focus on accelerating infrastructural projects coupled with easy availability of raw materials. With the development new strategies and new production values, upgradation and modernization of older plants is also positively influencing the growth of the market. 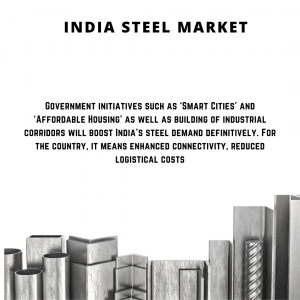 The Indian structural steel market is expected witness significant growth during the forecast period, owing to factors, such as the increasing demand from manufacturing sector, the rising preference toward pre-engineered buildings and components, and government initiatives for infrastructure development activities.

Construction is a sector which observes huge adoption of steel as structures are made with the use of steel due to its high durability and strength. Also, structures made with steel can withstand natural calamities and can be designed to meet the requirements of unique projects.

Additionally, social sector schemes by the government such as Pradhan Mantri Awas Yojana which is about housing for all, Sardar Patel Urban Housing Mission, 100 smart cities mission and infrastructural development of medium and small towns are further driving growth in India steel market.

During the pandemic, India’s demand for steel contracted in April 2020 with end-user industries like automotive, real estate, and infrastructure that constitute 80% of demand, coming to a virtual standstill.

According to a world steel report, India estimates 8.7 million tonnes of crude steel production in March 2020, down 13.9% compared to March 2019, primarily due to the ongoing difficulties presented by the pandemic globally. Domestic steel production fell by a record 69.5% year-on-year in April 2020.

A study conducted by World steel in collaboration with the Indian Steel Association notes that the construction sector is going to be a pan-India driver of steel demand in the country. This would be driven by strong government thrust for infrastructure development and housing for all.

Government initiatives such as ‘Smart Cities’ and ‘Affordable Housing’ as well as building of industrial corridors will boost India’s steel demand definitively. For the country, it means enhanced connectivity, reduced logistical costs and well-distributed development spanning all Indian states. 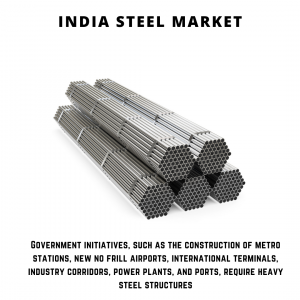 Other than construction sector, to develop the steel industry is expected to come through the ‘Make in India’ initiative, which aims to transform India into a global design and manufacturing hub, with sectors along the industrial and freight corridors. To that end, a number of Indian states are expected to set up automotive and ancillary industries to become global hubs for manufacturing export-oriented small cars.

Structural steel is one of the major raw materials used in construction of pre-engineered buildings. The government is pushing through extensive reforms to strengthen infrastructure and enhance productivity. It will be interesting to see how effectively India implements its reforms agenda and infrastructure plans to pave the way for optimal growth and expansion of the steel industry.

The rising demand in India, combined with the fact that global manufacturing companies’ focus to diversify their production by setting-up low-cost plants in countries other than China, is expected to drive the India’s manufacturing sector to grow more than six times by 2025, to USD 1 trillion. This increase in the Indian manufacturing sector had increased the number of manufacturing. Thus, this is driving the demand in the structural steel fabrication market in the country.

Government initiatives, such as the construction of metro stations, new no frill airports, international terminals, industry corridors, power plants, and ports, require heavy steel structures. Thus, these factors are expected to drive the growth of the structural steel fabrication market in India.

The top steel companies in India constitute one of the largest industrial revenue earnings in country, as the steel industry in India is undergoing new stages of development, aided by economic resurgence and growing demand in the downstream sector in India.